Art In The Park Art Show & Exhibit - No Artist Entry fee - reserve in advance, space is limited:  Ribbons will be awarded: First, Second, Third & Honorable Mention.   Sales: Artists may offer to sell their work. We suggest that pieces be kept as reasonable as possible.  Artists must be at least 16 years of age to show original works in oils, watercolors, acrylics, pastels, mixed media, drawings, photography and sculpture. Postcards, crafts and commercial type material will not be allowed. The artists must be able to be at their displays throughout the show and set up their own displays.  Download the entry form, followed by a waiting list if needed.Look back at Art in the Park from 10/2011 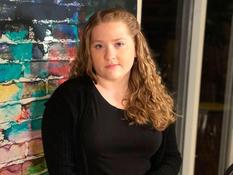 The Farmgingdale Village Merchants association is the descendant of the Farmingdale Downtown Master Plan Implementation Committee, which was a direct outgrowth of the Downtown Revitalization Committee.

After years of study and review a template was adopted by the Village Trustees in 2011 that set the stage for the current revival of our downtown.  Once the Master Plan was adopted, some members of the Revitalization Committee felt that the next step was to create events in the downtown to draw visitors to Main Street.

With that was born, Spring and Fall Restaurant Week, the Long Island Gingerbread House Competition, Music On Main, Music on the Green in addition to all the other existing events, 34 years of the Village Pops concerts, Movie Nights, the Columbus Day Fair, etc.

The main committee has spawned into two committees that have been busying building the Music On Main Events, Art In The Park, Cultural Arts Day, Trivia Nights and Music on the Green.  Village residents / merchants interested in contributing their time and talents are welcome.

We're all about bringing vibrancy to the downtown.

The Village of Farmingdale's Cultural Arts Day is as Bob Ross used to say, "A happy accident", born of some confusion from the scheduling of the 2015 Farmingdale Music Festival

Due to scheduling mishaps while planning Art in the Park and the Music Festival, the two events which were supposed to happen on different weekends, wound up happening on the same day.  What could have been a problem, turned into the inspiration for creating the Cultural Arts Day.  Having a juried art show and live music together turned out to be a happy convergence.  So, instead of having it happen by accident this year, we continue to have the plan the events concurrently. 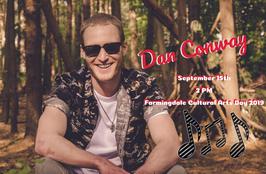 Jackie Romeo is a 16year old vocalist from Massapequa NY. She's been singing since she was born but three years ago Jackie's life changed when she attended the Debbie Gibson Electric Youth Workshop.  There she truly found her voice and impressed everyone in the room including Debbie who has since become a mentor and calls Jackie the next Adele. Right after that she won her Middle School Talent competition and at 14 she decided she was ready to pursue a career in music.  This year alone she has performed on the legendary Apollo stage and was a finalist and audience favorite at the Gold Coast Arts Center Your Big Break competition. Jackie has been accepted and is excited to attend to the Long Island HS of Performing Arts this fall. Follow Jackie on social media @JackieRomeoMusic

How we came to be

Dan Conway is a local performer, songwriter, producer, and recording artist. His primary instrument is the guitar, but often gets noticed for his sweet tone and high register when he sings. Dan just released his EP "Sycamore Sessions" which he wrote, produced, and recorded all from his home studio. You can find "Sycamore Sessions"  on all streaming platforms including Apple Music, Spotify, etc. His first single, "Relentless" tells his story of adversity, but never succumbing to the obstacles in his way. Dan is always releasing new music and content from his social media pages, instagram @danconwaymusic Facebook, DanConwayOfficial.  Please join Dan and the rest of us for a great day of art and music! 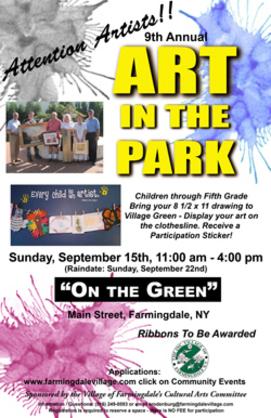